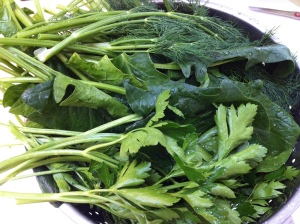 1-packet of fillo pastry – if you are using the U.K. brand ‘Jus-Roll’ fillo you will need 2 packs.

First chop the spinach quite finely. This can be done with a knife, obviously, but I have found that a good – and quick – result can be achieved by ‘pulsing’ a handful of spinach at a time, in short bursts, in a food processor. Don’t try to do to much in one go, as it will end up as spinach purée !

Put the chopped spinach in a colander, sprinkle with salt and leave to one side until you have completed the next stage.

Finely chop the leek, parsley and dill and put in a large mixing bowl, with the beaten egg, cream, feta and salt and pepper. Really put a lot of pepper – about half a teaspoonful.

Now add the squeezed spinach to the bowl with the chopped leeks, herbs, eggs etc.

Mix this all together very well.

Next, unroll the fillo pastry and cut through it (scissors or a knife will do) so that you have strips of pastry about 8cm x 30cm. You will have to use your judgement as to how you do this – it depends on the brand of fillo pastry you are using !

The easiest shape to fold the pies into is a sort of ‘spring roll’ shape – this style, in Greek, is called ‘boureki’.

So, you brush the fillo liberally with olive oil, put a little of the spinach mixture at of one of the shorter  ends of the pastry, in the middle. Fold the sides over and then roll the whole thing up. Try not to make the rolls too tight, as the filling will expand during baking.

(There are pictures for this on the ‘Practicalities’ page of this site.)

Put the rolls on to an oiled baking sheet and bake at 185-190 degrees for about 25 minutes, until golden brown.