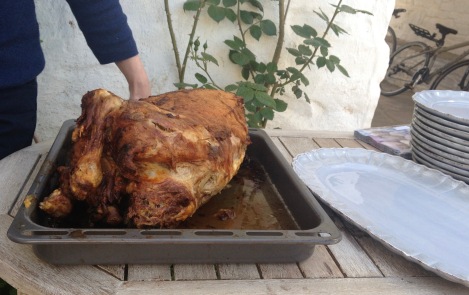 When English is your mother tongue, you never quite realise how tricky words like ‘in’, ‘on’, ‘to’ or ‘at’ can be. It seems so obvious, but it is actually a real minefield. In Greek there’s only one, and as a result, it does all get rather lost in translation, so to speak. Do you sit ‘on’ the table, or ‘at’ it? Do you take your coat ‘out’, or ‘off’?  Is your lamb cooked ‘in spit’ or… otherwise?  Hopefully, that is just a grammatical error and not a culinary one!

Lamb cooked on a spit is considered to be one of the great delicacies of Greek cooking, and is probably as old as time itself. What can be more natural than to roast meat over glowing coals? Certainly, at some point, the hunter-gatherers must have worked out that their prey was a lot tastier if you stuck it over the campfire for a bit. Obviously, in the days before refrigeration, you could only spit-roast a whole lamb or goat if you could share it with plenty of people. So this kind of meal became associated with major celebrations – something like a wedding or a religious festival. Just as in times gone by, for the important religious festival of Greek Easter, the age-old art of barbecuing a whole animal is the most popular meal to celebrate it with. It’s just that this year, things will be quite different.

With Greece in lockdown like the rest of Europe, Greek Easter, the biggest religious festival in the Christian Orthodox calendar, is going to be a challenge. This weekend’s holiday usually sees a mass exodus from the big cities and towns. It’s the time of year to go back to your ancestral roots in rural Greece and for families and friends to gather … things that are certainly not on the cards this year. The roads are more or less empty, traveling to the islands is allowed only for returning residents. The church services are being conducted by lone priests, with no congregation and behind closed doors. These are incredibly strange times. 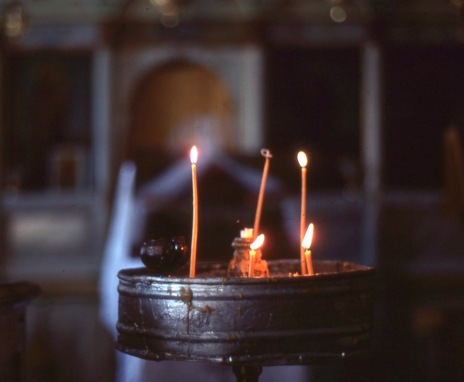 Reassuringly, the thing that is staying the same is the holiday food. Lamb is obviously still on the menu, but how it’s cooked will probably need to change. In the cities, sadly only those with gardens can consider spit-roasting a whole beast.. and to be honest even a family of four will be over-faced by that volume of meat. 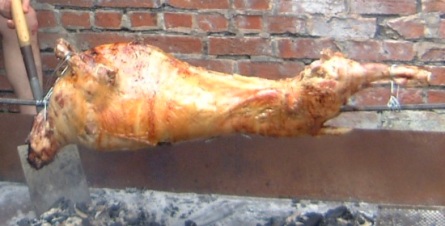 But although in most regions of Greece spit-roasting is de rigueur, there are some that traditionally go for other options. In the islands of the Dodecanese, like Kos,  oven-roasting a whole stuffed, baby lamb is the preferred recipe for Easter and other special occasions. In the past it would have been in a wood-fired oven, the door being sealed with mud, or perhaps taken to the local baker to be roasted along with others, for a small fee.  These days, a domestic oven has to suffice and the result is perfectly acceptable – although I do secretly hanker after a real-deal clay oven! 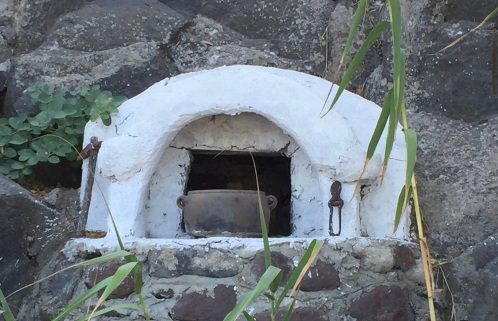 You’re not going to cook that amount of lamb every day but the fragrant stuffing of rice, pine kernels, cinnamon and mint is a truly wondrous thing and is a moreish accompaniment to any type of roast meat. The traditional Easter version includes little bits of sautéed lambs liver, but although it adds a meatiness, it isn’t essential, and to be honest, chopped chicken livers are even nicer in my opinion. The fragrance comes from the generous quantities of dried mint (for some reason fresh doesn’t do it here) and really good quality, ground cinnamon.  At Christmas I always use this as the stuffing for our roast duck (actually ducks in our house!) or goose … but that’s for later in the year, when hopefully we can all sit around the same table again. 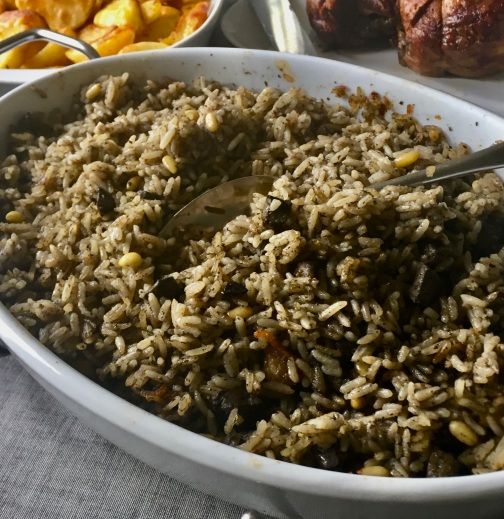 Our socially-distanced Easter will mean that it’s just the two of us for our Sunday lunch, so a shoulder of slow-roasted lamb will be just enough. I will be sticking to that traditional recipe from Kos,  and make a big dish of rice and pine kernels to go with it. Some things definitely need to stay the same – especially now.  Happy Easter – Καλό Πάσχα ! 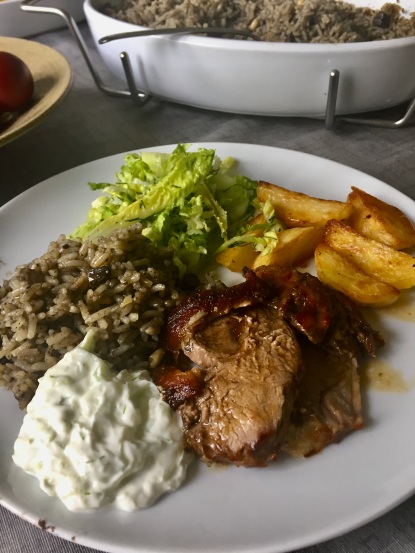 (Thanks to @insofiaskitchen for the spit-roasted lamb photo !)

180 gm lamb or chicken liver, chopped into small pieces (Optional if you’re not a fan of liver.)

Salt and pepper to taste – I would suggest 2 teaspoons of salt.

Put the oil into a large frying or sautée pan or wok and heat it up.

If you are using the diced liver, add it now, and sautée until its almost cooked through .

Now add the rice and mix it in well with the onions and liver (if used). Be careful not to completely fry the rice   … you don’t want savoury ‘Rice Crispies’!!

Next add the pine nuts and mix in well.

Now you need to add the water a bit at a time – a bit like making risotto. So add about 100ml of water each time. Only add more when the previous amount has been absorbed. Stir the rice mix very frequently so it doesn’t burm

The rice will slowly begin to cook through. When it’s about halfway cooked start to add the seasonings – salt and pepper to taste – and the cinnamon and dried mint. This is purely on personal taste and also depends on the quality of the flavourings. You don’t want to be over-powered by either, but the rice should be very fragrant.

Keep adding water – you may need a bit more – until the rice is just on the verge of being cooked. It needs to have just a bit of ‘bit’ but mustn’t be too soft.

If you are using it as stuffing, allow it to cool completely before using.

If you are cooking it as a side-dish, transfer it all to an ovenproof dish, add half a cup of water and cover well with foil. If you have any spare pan juices from your roast, you can mix a spoonful or two into the rice mix before baking. 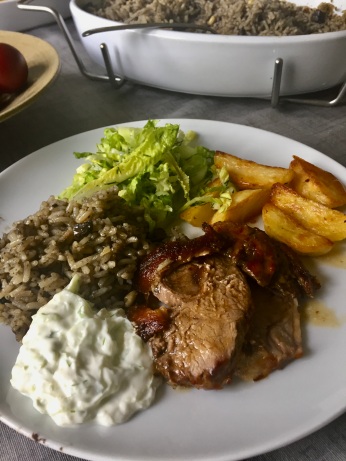