The definite evidence for one of my ‘guilty secrets’ is the piles and piles of cookery books that I seem to have acquired over the years. Some are real ‘workhorses’, referred to for the basics; a quantity of pancake batter or the perfect proportions for a classic vinaigrette. Others are filled with beautiful photography and fantastic when I need a bit of inspiration. Inevitably, I have more Greek cookery books than is probably truly necessary for one life. And then there are the books that, although I use them to cook with, they are also a really good read, and offer something much more than a compendium of recipes. They are stories of discovery.

The most obvious one is by Elizabeth David, of course. She hadn’t had the standard background for a hugely influential food writer. Things changed when she and her lover, Charles Gibson Cowan ended up stranded in Greece just as war erupted all over Europe. Up to that point Elizabeth had been a debutante, an actress and a sort of haute couture ‘personal shopper’, but always with a latent interest in food. Elizabeth and Charles, flouted the morés of the time, bought a sailing boat and set off to explore the Mediterranean. It was probably one of the most badly timed ‘jollies’ ever and they were constantly pushed south and east as the army of the Third Reich moved across the continent. By late August 1940 they were in Greece, on the island of Syros. During that autumn and winter, in a primitive kitchen, Elizabeth learnt how to cook like an islander, using only the local ingredients : olive oil, dried pulses, seasonal vegetables and the fish caught in the Aegean. With the invasion of Greece in  April 1941, she decamped to Cairo and experienced all that the Middle East had to offer.

On returning to a very bleak, post-war Britain, Elizabeth David made arguably one of the biggest contributions to modern British food with the publication of ‘Mediterranean Cookery’. In the preface to one edition she says that, back in England in those years of austerity, unable to service her ‘addiction’ for the food of the Mediterranean and the Middle East, she felt the need to ‘put my memories on to paper, so that I would not forget about the bright vegetables, the basil, the lemons….the honey and yoghourt for breakfast, the rose petal jam, the evening ices eaten on an Athenian café terrace in sight of the Parthenon’. You don’t have to have sat on such a terrace or have walked through a Greek market, to know what Elizabeth David was talking about but she makes you feel that your life is poorer until you have done! It is her love for being in Greece, for the  ‘Spirit of Place’ that she conveys. so convincingly. 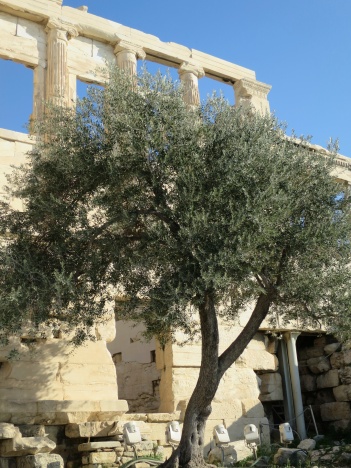 When, some years later, a book titled ‘The Home Book of Greek Cookery’ was published by an unknown writer, Joyce Stubbs, it was probably inevitable that David would be asked to write a review.

In The Spectator of 11th July 1963 she writes enthusiastically of Joyce Stubbs and her book. ‘… in good simple authentic English words ….giving at the same time phonetic renderings of the Greek names for each dish and its ingredients, so that the book will be of very great value, not to say indispensable, to anyone going to Greece for the first time and knowing nothing at all of the language nor what to expect of the food.’

We even get a glimpse of David’s own original struggles with Greek cooking too, ‘I wish I had had such a book when I first went to Greece. It would have saved me many of the misunderstandings and enraged exchanges with tavern keepers and waiters which nearly every visitor intending to make a long stay in Greece has to live through before coming to terms with the Greek conception of cooking and eating.’ 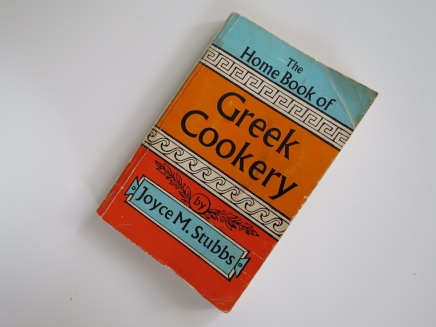 The life of Joyce Stubbs is a bit of a mystery. Despite the success of ‘The Home Book of Greek Cookery’ – it was reprinted no less than five times and was one of the few Greek cookbooks published in England then – I was surprised to find that there was no Wikipedia entry for her, no potted biography; hardly any mention of her at all, not even a photograph. In spite of that, copies of the book are still in demand through second-hand book sellers and she still has her fans. Clues to her life are, of course, in the book. She describes a house in Greece, on the island of Spetse, on ‘an olive estate, one of the loveliest in Greece’. It was here that she ‘learnt the secrets of Greek cooking – unpublished and preserved only among friends’. Her teacher, in these secret arts was her friend, Crisulla Tombaziadi, who shared her recipes ‘as poetry and music were handed down among the bards’. Like Elizabeth David, Joyce Stubbs is a woman in love, not only with Greece and its food, but the very idea of Greece itself; the ‘aromatic herbs from the hillside’, ‘an apronful of wild figs’, ‘the silvery olive trees billowing down to the sparkling Aegean’. This is a woman smitten. 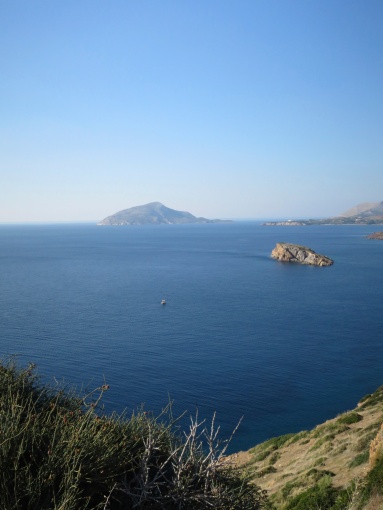 In The Spectator review, Elizabeth David says that Joyce had been living in Greece for 15 years – that takes us back to 1948, some truly grim years for a country emerging from Nazi occupation and about to enter a ghastly civil war.  An unlikely period it would seem to pitch up as an Expat.

The official records seem to show Joyce as being born in Lancashire in 1909; her father listed as a ‘cotton waste dealer’. As war broke out in 1939 she married Richard ‘Dick’ Stubbs, ‘an advertising manager’. There are various mentions on line of Dick taking his skills in publicity and advertising ‘into the army and spending the war in Cairo’. One can only assume that Joyce went along too. Post war, in the years when a new world order was established, Dick worked for the government as a press officer, first in Palestine and then in Greece. Perhaps they never went home ….

In the Faber and Faber archive there are just two letters referring to Joyce Stubbs; one from Joyce herself and one from Dick, just as her book was about to go into its second edition. They are typed on the headed notepaper of ‘Ergon Advertising Ltd.’ with a smart address in the Kolonaki district of Athens, and here we get a snapshot of their lives in that summer of 1965.

Writing to her editor, Eileen Brooksbank, Joyce’s letter is bubbly and chatty, with expectations of ‘a natter’ when she’s next in London. She has prepared revisions for the next edition ‘under difficult conditions’ but would be sending them ‘a.s.a.p’. She has had complaints from friends in London that they cannot get hold of the book. She asks for gift copies to be sent to some well-known people in Athens – the Minister of Tourism, to Leslie Finer, an Athens-based British journalist and the manager of the Grande Bretagne hotel, where the book is ‘selling like hot cakes’. In early September she is leaving ‘for England… by car with the children who go to school on 15th’. This is a women unfazed by a two week drive across Europe. There is a hand-written note in the corner, ‘forgive typing, but with 40 visitors in 4 days with inadequate help, this has been written in haste, love, J’.   Who would not have wanted to be one of her guests, ‘sitting under the great pine tree and talking of food.’

For me the enduring charm of Joyce Stubbs’ book are the references to the country, its people and its traditions. In many ways it almost reads like a blog, with her stories and notes recalling a life lived right at the heart of the community. The way that rosemary in the final laundry rinse ‘is very useful for freshening black dresses’ and bay leaves used in the same way ‘impart a deliciously clean smell to the sheets’. The recipe for, mayeirítsa, the traditional Easter soup,  comes with the explanation that Holy Week is also the time for spring cleaning, so ‘men with five-foot long brushes and pails of whitewash make a round of the houses offering their services.’  There are too the well-remembered meals, Crisulla frying ‘the ink of an octopus…to serve with some of her home-baked bread fresh from the oven’; a mezé of sea urchins ‘gathered on the rocks that morning’, or the ‘lamb roasted by the boy Vangeli at the Inn on Mount Helion’.  Above all the experience is sensual, ‘There is a blending of the senses when one dines with the sweet aroma of the pale blue wisp of olive-wood fire in the kitchen’.  This is less a cookery book and more a love letter to Greece and her life there. 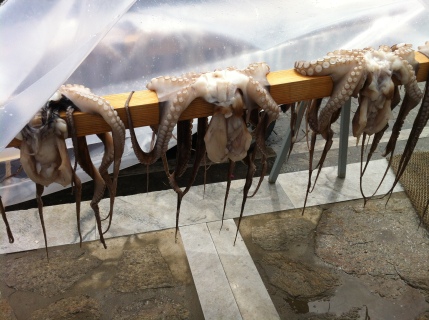 My copy of ‘The Home Book of Greek Cookery’ is now over 40 years’ old – it is well-thumbed and  food-splattered, evidence of it having been a stalwart companion in my own efforts. Bought before I ever set foot in Greece, Joyce Stubbs took me by the hand and showed me what I had to look forward to. Eventually, when I went to live in the country, she was a very valuable advisor and, as Elizabeth David wrote, an indispensable guide. I wish though that I could have really sat under that pine tree on Spetse talking, or tried some of Crisulla’s fried octopus ink.  Joyce wrote that cooking a Greek meal in England is ‘as refreshing as a day in the sun’, a statement I can vouch is as true today as it was in 1963.

There must be hundreds of  recipes for Koulourákia, the Greek Easter biscuits, and I have tried a lot of them. This year I went back to the one Joyce Stubbs recorded in ‘The Home Book of Greek Cookery’.  The result was a batch of perfect, sweet Koulourákia – crisp on the outside, just the right softness on the inside and scoring 10/10  for dunkability !  In the book, the measurements are in a mix of imperial measures and cups, for ease I have converted it all to metric weights.

650 gm flour  – with extra for shaping the biscuits

Beaten egg  or milk to glaze.

Cream the butter and sugar until it is white and fluffy.

In a cup, dissolve the baking powder in the warm water and add to the creamed butter and sugar. Mix well.

Add the brandy and vanilla essence and again mix well.

Sieve the flour and the salt and add to the butter and sugar mixture. Stir in gently with a spoon,  until it is soft enough to handle.

Break off pieces of the dough and with your hands roll into ‘ropes’ about 7 cm long and about 1 cm thick. Twist the ropes into a sort of loose braid, or into rings.

Place the shaped biscuits onto a greased baking tray and brush with the beaten egg or milk.

Remove to a cooling tray and enjoy !

With thanks to Richard Brown, archivist at Faber, Eileen Brooksbank and Souli Yates for their help.