Here in Athens, 2016 has arrived with a long-anticipated blast of wintery weather. All through this autumn, Greece has been basking in bright sunshine and temperatures that would put an English summer to shame. To be honest, you could tell that the Greeks were getting a bit weary of it – longing to get a good log fire going in their under-used fireplaces, and break out the thick, winter coats. For days this impending visitation of cold, apparently descending from Russia, was the main topic of conversation for forecasters, newsreaders and locals. And finally it arrived, right on cue for New Year’s Eve; thick snow falling over most of the central, northern and mountainous parts of the country. So, for the last few days the news has been dominated by reports of children playing in the snow and happy skiers – polar scenes have, thankfully, usurped polarized politicians for a while.

It has been quite a while since I have spent Christmas in Greece and it has been reassuring to see how the truly Greek traditions are still enduring, despite the onslaught from more recent, imported customs. For a start, Christmas celebrations go on longer here – it’s not all over by the evening of 25th December, with the shops bombarding you with cut-price sales on Boxing Day. For a start, the rotund gentleman in the red suit doesn’t come to Greece until January 1st; here he is Saint Basil and not Saint Nicholas – that’s someone totally different! So with this later arrival date, the present-buying season is in full swing right up to the end of the year. The celebration of New Year is party time, but it is an important time for families too. New Year is also an opportunity to firm up good fortune for the coming year with a little bit of gambling – maybe a lottery ticket or a few games of poker. Good luck for the next twelve months is also ensured for the winner of the coin in the Vasilopita – the traditional New Year cake. 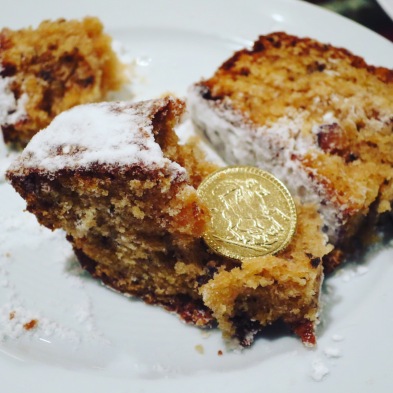 In Greece the Twelve Days of Christmas really do go on for twelve days, with Epiphany on 6th January being a public holiday; again with another round of traditions and celebrations

Of course there are Christmas trees, and holly, and twinkly lights – in fact there are an awful lot of twinkly lights everywhere. But there are other things, like boats, pomegranates and the musical triangle – that, for Greek people, shout ‘It’s Christmas !’  just as much as yule logs and mistletoe do in Britain.

The pomegranate is an ancient symbol of fertility and plenty. Of course, these beautiful golden globes, bursting with ruby-red seeds are abundant during the winter and are perfect candidates for incorporation into this season’s symbolism. On New Year’s day it is common to break a pomegranate on the threshold of the home – a custom that must be as old as time itself, in these parts.

For a country where the sea is of crucial importance, it seems appropriate that decorated model boats should form part of the imagery  at Christmas. In the past children would make them from wood or paper and carry them as they went from house to house, carol singing. Decorative boats and pomegranates are everywhere at this time of year.

And the musical triangle ? This is the main instrumental accompaniment for Greek carol singers – and carol singing, I am pleased to say, is still in its traditional form. Carols are sung on Christmas Eve, New Year’s Eve and at Epiphany; each of the days having its own specific carol. In much the same way that genuine ‘Trick or Treating’ is a childhood activity, so is carol singing in Greece. It has been really heart warming to see groups of children going around the neighbourhood, triangles in hand. 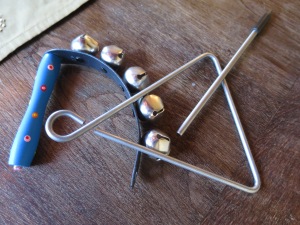 With the ring of the doorbell, the carol singers must ask,  ‘Can we tell them to you ?’  and the reply from the householder has to be, ‘Yes, tell them to us’.  Of course, their efforts are rewarded with a few coins and sweets, best wishes for the season and a request for a similar visit next year.  These are all true traditions; hard-wired into the psyche of the people and hopefully here to stay.

My culinary output has taken a bit of a back seat this Christmas – mainly the guest and not the hostess. I did cook a few things that, hopefully, were welcome additions to the seasonal spread but good at any time of year too.

Remember – a good recipe is for always and NOT just for Christmas…Happy 2016 and happy cooking !

Wash the fennel, and trim off the stalks at the top, retaining any of the feathery leaves. Trim of the root stump at the bottom.

Slice the fennel as thinly as you can. A mandolin slicer is good for this – but mind your fingers.

Sprinkle the sliced fennel with a little salt and leave to rest for a few minutes.

Finely chop the washed leek and put in a mixing bowl with the chopped dill. If you have any of the fennel leaves, chop them too and add to the bowl.

Now take the chopped fennel, a handful at a time, and squeeze out as much liquid as you can, discarding the liquid.

Add the squeezed fennel slices to the bowl with the chopped leeks and herbs.

Now add the beaten egg, crumble in the feta and season. Go easy on the salt, as the fennel will have retained some of the salt from earlier and the feat is salty too. Give the mixture a really good stir.

Now add 1 tablespoonful of flour and mix everything together again. At this point it’s a good die to mix it all with your hands, to make sure all the ingredients are incorporated.

The consistency of the mix should be fairly stiff and sticky. If it seems too watery, add a little more of the flour until all the ingredients are bound together. You don’t want too much flour, as it makes the finished fritters heavy and doughy.

In a large frying pan heat up enough olive oil to shallow fry the fritters. The oil needs to be hot enough to seal the fritters when you drop the mixture into the pan but not so hot that the mix burns.

Drop walnut sized blobs of the fennel mixture in to the hot oil. When it is firm enough, flip them over and fry the other side. You will need to do a few batches as you mustn’t overcrowd them in the pan.

Turn the fritters over a few times until golden brown.

Serve as a starter, accompanied with a little Greek yoghourt or as a mezé.

This is a really easy side dish, great as a topping for toast or a side dish with cured meat.

3 large, long red peppers (the ‘Romano’ or similar – in Greece this would be ‘Florina’ type peppers.)

3  whole cloves of garlic, with the skins on

Half a teaspoon of balsamic vinegar

In a medium sized frying pan heat up a couple of tablespoons of olive oil, add the pepper slices and the whole garlic cloves. Cook  on a medium heat, for about 15 minutes, stirring frequently. The idea is to end up with  soft, gooey strips of red pepper and soft squishy cloves of garlic.You mustn’t let it burn or the garlic will become bitter.

Squeeze the flesh of the garlic out of the papery skins – get rid of the skins.

Now add the olive to the pan and cook for another few minutes, stirring frequently.

Remove from the heat, add the balsamic vinegar, a drizzle of olive oil and season.

Sprinkle with the chopped parsley and serve warm or at room temperature.