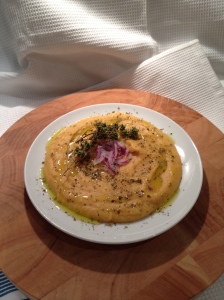 There are a few ‘Greek food myths’ that really drive me crackers and the first one is hummus. Obviously, when I say ‘There’s no such thing as hummus’,a trip to any supermarket in the U.K. will expose this statement as a nonsense – of course hummus really exists! It just doesn’t exist in Greek cuisine. It drives me to distraction when I see it parcelled up with tzatziki and taramasalata as ‘Greek’ dips-the labelling , more often than not, in that rather irritating ‘fake’ Greek font! Despite all that, you will really struggle to find any of the stuff in Greece – unless you are in a Middle Eastern restaurant, that is.

I suppose that our perception of the hellenic origins of hummus comes from Cypriot tavérnes in the U.K. The cooking in Cyprus is heavily influenced by its proximity to the Middle East and they have adopted many levantine dishes – one of them being hummus.

It just hasn’t got as far as Greece-proper … OK ?!

So now I’ve got that off my chest (feel better for that already !) I can now introduce you to hummus’ closest Greek cousin  – Fáva. 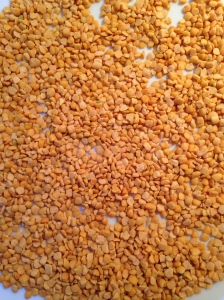 Fáva is more subtle than hummus – there’s neither garlic nor tahini; neither is it made from chickpeas. Instead, it is made from a type of pulse that,although bears a passing resemblance to the split pea, is in fact the seed of the grass pea or white vetch. It grows well in arid locations, so it is little surprise that the best fáva comes from Santorini – considered so special that it has been given a P.D.O.(Protected Designation of Origin) status. You can have a go at using split peas – Yotam Ottolenghi uses them in a recipe he has for fáva – but the taste is not the same. Real fáva is sweeter and has less of the ‘pease porridge’ flavour. And although I generally worship Yotam, his addition of turmeric is a little uncalled for!

When you can get hold of the real thing, fáva is so easy to make and always a very welcome mezé. It is served either cold or warm, with plenty of chopped onions and a good drenching of olive oil. In our house we always give it liberal sprinkle of oregano and black pepper, but others like it with a  squeeze of lemon juice and even a scattering of capers.

So next time you are in Greece, or a Greek deli here, pick up a packet of fáva. I promise that you will not be disappointed.

1 shallot – or half an onion, coarsely chopped.

First of all, spread the fáva out on a plate, or a board, to check for any occasional small, stray stones !

Next put the fáva into a sieve, and give it a good rinse under the cold tap.

Put the washed fáva into a fairly large saucepan, cover with water, add the chopped shallot (or coarsely  chopped onion), salt,bay leaf and a glug of olive oil – about a tablespoon.

Bring the mixture to the boil, taking care it doesn’t boil over – it does have a tendency to do that! Allow to simmer for about 25 minutes. While it is cooking, a froth will appear on the surface – carefully skim off as much of this as possible. Make sure that it doesn’t boil dry too, it needs to have some cooking liquid left.- it needs to have the consistency of slightly runny porridge.

When the fáva is cooked, remove the bay leaf and allow to cool for a couple of minutes. Take a a stick blender and blend the mixture until you have a fairly thick, smooth purée – something like the consistency of runny mashed potato.

Put the mixture onto plates or into small bowls, and serve, either cold or warm, with chopped onions, oregano, and a good drizzle of olive oil. Lemon juice and capers may be added as required.

Serve with plenty of crusty bread, or warm pitta bread.